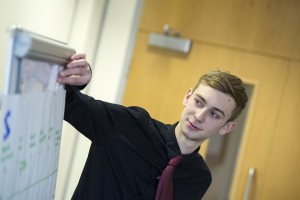 This year seems to have flown by – and it’s hard to believe we are now less than two months away from the 2018 Worcestershire Apprenticeship awards.

This year’s nominations have now been announced, and I was delighted to see that Sanctuary Group is in the running for the Large Apprenticeship Employer of the Year.

Since joining Sanctuary as an apprentice, the support I have received has helped me build confidence as a person both inside and outside of the workplace.

It is a great statement for the organisation to receive this nomination and, for me, deserved recognition for all the support that it offers its apprentices.

I’d also like to say a big well done to all the other nominees and wish them luck for the awards.

It’s great to see apprentices continue to make a hugely positive contribution to businesses here in Worcestershire and that there is such fantastic support for apprenticeship programmes right across the county.

Speaking to friends that have recently completed A levels, it has also been refreshing to hear that some are opting for the apprenticeship route rather than university, choosing to do higher level apprenticeships as their next step.

It really shows that apprenticeships are on the rise and people are putting real consideration into what their plans are for the future and what may be best suited to them.

As an apprentice ambassador, there are some great opportunities and events coming up soon which I am looking forward to attending.

One of these is the Worcestershire Apprenticeship Show on 18 October, which I would really recommend to anyone completing sixth form or school at the end of 2019.

It is a great opportunity for young people to understand how apprenticeships work and the benefits that they offer.

Thank you for reading and for regular updates, follow @No1_apprentice.