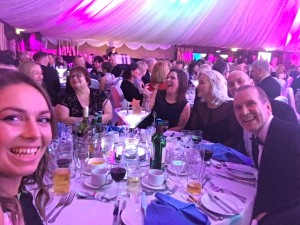 This time last year I had no idea what the next 12 months would have in store. I must say though…it has been an incredible journey.

So much has happened since becoming the 2016 Worcestershire Apprentice Award winner. From meeting loads of apprentice employers throughout Worcestershire, to attending Skills Shows and Careers Events at local Schools and Colleges, and being the recipient of the nationally recognised engineering award at the Science, Engineering, Manufacturing and Technologies Alliance (SEMTA) awards ceremony in London!

If there was one thing I hoped to do during my time as the Worcestershire Apprentice Award winner, it was to get the name of apprenticeships out there. Apprenticeships should not be seen as a second option, but as a first choice. My aim was to de-bunk the myth that an apprenticeship is a second-rate pathway. Hopefully, my shared experiences on this blog have proven that apprenticeships are viewed as a viable, and encouraged, career choice throughout this great county.

I don’t intend to do a Gwyneth, but there are some important people I would like to say a big thank you to.

First and foremost, I would like to thank Kim Cook, Matt Tope, and the rest of the team behind the Worcestershire Apprenticeship Awards. Thank you for giving me this incredible 12-month opportunity. It must be said that, without these awards, employers and young professionals wouldn’t receive the level of recognition for their hard work that they deserve.

Secondly, I would like to thank everyone at Southco and Herefordshire and Worcestershire Group Training Association for their support over the past 4 years. With special thanks to my Apprentice Mentor; Mark Gilbert, my Manager; Nick Bennett, my Training Officer; Grahame Davies, and Apprentice Applicant Engagement Officer; Nicky Scott.

Finally, I would like to thank my family and friends who have been with me through it all, from redundancy to promotion!

Now to hand over to a very special individual who has achieved much during their apprenticeship. Ben Hyde works with Sanctuary Group’s finance department and has responsibility within the Group Procurement Card team to further develop his finance skills. Ben helps Sanctuary by producing practical documents for his team and financial accountants. He has learned about bookkeeping controls and transactions during his AAT studies and has sent data to the Financial Reporting Systems team. When a new member joined the team in December 2016, Ben was responsible for their training. He has joined the West Midland Young Apprentice Ambassador Network, and has since attended apprenticeship events at the House of Commons and the NEC to promote apprenticeships. Ben stated that his greatest personal achievement to date it passing all three of his Apprenticeship exams with a minimum of 87% pass rate.

Finally, a big thank you to our readers, for following the blog and reading my posts, it’s been a pleasure. Pippa out! x