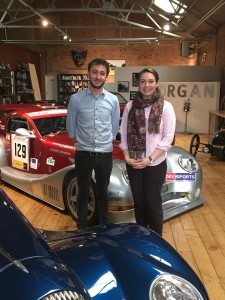 A few months ago, I met with a very well-known British car manufacturing firm. The Morgan Motor Company was established in 1909 by HFS Morgan. The longest running model is the Morgan 4/4 which has been in constant production since 1936, while the recognisable Three Wheeler ceased production in the 1930’s and came back just a few years ago. Over 1300 vehicles are coach built every year at their premises in Malvern. The Classic Range of Morgan motor vehicles is the flagship, and engine sizes range from 1600cc to 4800cc.

Succession planning is at the heart of Morgan Motor apprenticeships. Many of the operations during coach building the vehicle cannot be taught theoretically at college or university. These techniques are practically learnt over several years. Someone working in the Trim Shop, for example, will have completed a 5-year apprenticeship, instead of a standard 4-year apprenticeship, because there are no college courses on offer. “An apprenticeship allows maintaining these tradition skills” Sarah Baldwin, HR manager, told me during our meeting. This supports the workforce and allows them to diversify and mould the individual to the Morgan Motors style of thinking and working.

Morgan Motors tend to look at the individual rather than their school grades. Obviously, you need the basics of Maths and English GCSE, but if you are enthusiastic, willing, and determined, these are characteristics that Morgan look for in a future employee. They also take on a record number of work experience students every year.

Steve Morris, Managing Director of Morgan Motors, started his career as a Sheet Metal Apprentice at Morgan. His journey shows that there are so many benefits to starting at the bottom and working your way up, especially in a specialised company such as this. “We can teach anyone to do anything, but they must be committed. We take on apprentices with the vision that they will stay with us in the long run.” Sarah told me. This does mean that Morgan will not take on the same set number of apprentices every year though. Currently they have apprentices in the following departments:

I was fortunate to meet one recently graduated apprentice, Sam Mackintosh. Sam always wanted to do a craft as a career. He applied for an apprenticeship at Morgan via an advert but was unsuccessful the first time. He went on to do a joinery course at college. Part way through this he was written to by Morgan inviting him for an interview. Sam was successful and started his apprenticeship as a wood work apprentice. Both his dad and grandad completed engineering apprenticeships. His family were completely supportive of his decision. After two years Sam swapped to finish his apprenticeship as a design engineer. His next step is to complete a degree at Wolverhampton University.

“I wouldn’t be where I am now if I had chosen another pathway like pure academics” Sam told me.

I also had the opportunity to meet a current apprentice in his third year of his four-year apprenticeship, Lewis Potter. Lewis used to walk past Morgan Motors every day after school. He met one of the Morgan employees at a school event and was invited to go on a Morgan tour at the factory. “I’ve always been more vocational. I could never sit behind a desk all day” Lewis told me. After the facility tour, over the next two years, Lewis would work up a very decent amount of work experience time at Morgan. An opening in the Painting department came about and Lewis was offered the apprenticeship.

“My parents were totally supportive. My brother did well at college but mum and dad could see I was more practically minded” Lewis says. I good piece of advice that Lewis gave me was, you need to work from the base up. Start at the bottom, work hard, and eventually it will pay off.

Something I found speaking to these young men was their determination. They were not just given something straight away. They both had to try more than once to get in. But they are proof that this hard work does pay off! As the old saying goes, if at first you don’t succeed, try again! Both young men understood that where you start is not necessarily where you end up. This is important, because you make your own future.

If you are interested in applying for an apprenticeship at Morgan Motors, please email your CV and details over to Sarah Baldwin.