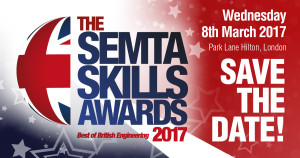 I’ve only been interviewed on film once in my life. That was a case study for my Training Provider – Herefordshire and Worcestershire Group Training Association. If you search hard enough you’ll probably find it. At the time, being filmed did not come naturally to me. I guess for many other people it does.

SEMTA –The Science, Engineering, Manufacturing Technologies Alliance, is a not-for-profit organisation responsible for engineering skills for the future of the UK’s most advanced sector. They are committed to inspiring the next generation of engineers, showcasing the best of British engineering talent and driving excellence in STEM teaching through The STEM Alliance, an innovative initiative which aligns further education with industry needs.

One way SEMTA showcases the best of British engineering talent is to hold an awards evening each year to celebrate this talent across nine different categories. From Training Provider of the Year, Skills Champion of the Year, to Graduate of the Year and, you guessed it! Apprentice of the Year!

Back in November my Training Office – Grahame, suggested I enter the awards for Apprentice of the Year. To my astonishment, in December, I got a call from Megan who is the events coordinator at SEMTA. She rang me to say that I had been selected as a finalist for the Apprentice of the Year award. WOW – just WOW!

To know that out of hundreds of applicants, the judges saw my application and thought “She’s got what we are looking for” is amazing. I think it’s a hard task to get to know what someone is really like just through a piece of A4 paper. This is where the filming comes in… As part of being selected as a finalist, and to aid your application for the final round of judging, you need to be filmed. This is to bring your written entry to life and showcase your dedication to skills. So, on the January 25th it was my turn to host the film makers, Dave and Derek. Dave and Derek work at Eclipse Communications in Redditch. On their second to last day of a 2000-mile film trip, they met me bright and early at Southco Manufacturing. I’d been rehearsing my answers for days. What came down to probably less than an hour’s filming would then be condensed by Dave and Derek to only 4 minutes of film.

It is difficult to get the courage to enter yourself in a competition like this. It helps immeasurably to have people supporting you. I was very fortunate to have Southco Manufacturing and Worcester Group Training Association supporting me throughout this process. But I feel we need to look at the bigger picture. This kind of award gives you opportunities you never thought you had before. It allows you to reflect on what you have done, and what you still want to do. It gives other young people something to aim for. Sometimes all you need is to know it is achievable, no matter where you start from.

I’ve always seen myself as a problem solver. Often engineering is all about problem solving. You don’t have to be academic to be good at it. Take R J Mitchell for example. His father was a railway clerk and the family lived in the slums of Liverpool before the second world war. Mitchell was a bright student but his parents couldn’t afford to give him a good education. After leaving school he didn’t go to university, but instead served an apprenticeship. He then became a design engineer and was the Chief Engineer behind the design of the Spitfire. The Wright Brothers are another fantastic example of success through the desire to do better and problem solve. Farming boys from deep in the heart of the USA. They both served apprenticeships and went on to invent the first flying machine! Much of what they developed back then, we still use today.

What I’m saying is you don’t need to do a full time degree or higher education to be a good engineer. One thing we all have in common is a curiosity and desire to problem solve. To make something work better. This is why an apprenticeship is the next step – earn while you learn. This award isn’t just about the privileged few. We are all here, we all enjoy what we do, we are growing in number, and we should all be recognised for our achievements – big and small! Bring on the 8th March!