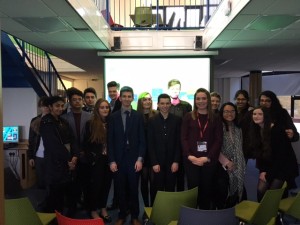 I play hockey for Hereford Ladies 2nd Team. The club also has a couple of men’s teams. A friend of mine, who plays for the men’s 1st team has just recently come back from University. He graduated with a Marine Biology Degree. Now, I’m not sure you know where Hereford is, but I can tell you it is about as far from Marine Life as you could possibly be. He’s now back in Hereford, applying for jobs, and is really struggling to find anything in his field of study…shock! If he decides to pursue work in Marine Biology he will need to move away from family, fund himself, and move to the coast. But in the meantime he is stuck at home looking for any kind of job to tie him over. No jobs of which have any relevance to his degree.

This is the story I told to a group of year 12 and 13’s at St Augustine’s Catholic High School And Sixth Form Centre in Redditch earlier this week. I was there to help promote Higher and Degree Apprenticeships with Helena Baxter. Through initiatives like “Meet the Apprentice” and “Apprenticeships Made Easy”, Helena helps schools to prepare students for the world of work. The workshop she gave the year 12 and 13’s was to develop a full understanding of Apprenticeship programmes, personal and communication skills, better performance at interviews, and knowledge of Apprenticeship local job opportunities.

I was there as Apprentice Ambassador for Worcester. After the story about my friend and his trials to find a job in his chosen field of study, I then went on to tell my own story. A story of how I came to choose my pathway – not being happy at college and wanting to look for other pathways than just going to university, of the ups and downs during my apprenticeship – The ups – being hired in the first place. The downs – being made redundant. The ups again – being hired a second time to complete my apprenticeship, and finally successfully completing my apprenticeship, and what I plan on doing next – applying for internal roles at Southco Manufacturing to take the next steps into the engineering sector.

Something I tried to show the group of students sitting in front of me was the enthusiasm I had for my apprenticeship. Enthusiasm got me my first interview, enthusiasm got me my second interview, and hopefully enthusiasm is what will help me to be successfully offered a new position at Southco. The truth is, enthusiasm is infectious, and I really hoped I was able to enthuse at least some of the students in that room, so that they would seriously consider an apprenticeship as just as good a pathway as alternative higher education routes.

One young person we met wanted to do accountancy and I got an email from Helena to say that she has found the young person an apprenticeship in Bromsgrove. This really proves how the Hub and Clearing House really is working, and how quickly it is working.

I look forward to the next session with Helena and hopefully inspiring more students to take the pathway I chose four years ago.

If you would like to find out more about Apprenticeships near you, visit www.gov.uk/apply-apprenticeship or head to www.getingofar.gov.uk