Sixth Form? Work? Or an Apprenticeship? These are some of the next steps after collecting your GCSE Results. The issue that I had found (8 YEARS AGO!!) was it was easy to be swayed by the choices that your friendship group were making. At this point, I knew I would be going to university due to my siblings following this path, so the obvious decision was to stay on at my high school to study A Levels. Luckily enough for me, the majority of my friends were staying put.

We all get worried about the results in the envelope, however, what I hadn’t anticipated was how overwhelmed and upset people were getting over this change. Over half of my year were not staying on, 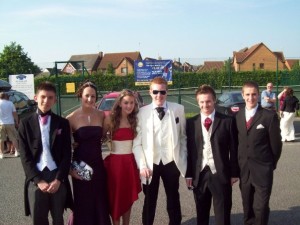 either opting for employment or specialist college. From my experiences with speaking with students is that things have changed a lot since I was in this position. Apprenticeships are being embraced by different sectors, employers and students which is amazing! Back in 2008, this was pretty much a non-existent option with the perception being that apprenticeships were only offered for those wishing to pursue a career in engineering!

We celebrated our GCSE results, as our year had surpassed expectations on the pass rates (we were troublesome!). Our summer ball was at Worcester Racecourse and it was probably the first time any of us had properly bothered to make ourselves up in front of each other. For me, it was even stranger given I lived in sports kit, never wore make up/curled my hair or wore a dress. You girls have it lucky as 16 year olds, we had it tough in our day! Our era embraced the Bench coats, hideous heavy make-up, hair extensions where you could see the clips and we’d moved away from the bulky Pod school shoes into the dolly shoe, Sony Ericsson and Motorola’s phones were deemed cool. The day after the ball, we had to go into school wearing what we’d wore the night before. And the floodgates opened….

I believe it to still be the case that things change at this age and the quite scary decision of where you go next can make a massive impact on your future. My decision enabled me to go onto a Level 3 apprenticeship, even though I applied for one years later.

Whatever decision people make today following their results, your future path can always alter. Do not be influenced by what other people want to do. Go for what you want to do. If you’re stuck, do not panic! There is enough support and advice, especially from the Worcestershire Apprenticeship Hub on your options.

Well Done to everyone today I hope you got what you hoped for!