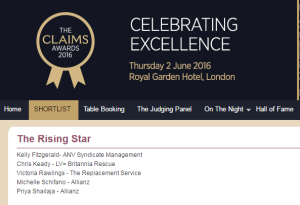 Heard the expression about all buses coming at once? I never understood what it meant until now. From my previous posts, you would have read how being crowned Worcestershire’s Apprentice of The Year was a massive shock to me. Following on from this, I was recently shortlisted for ‘Young Woman in Business’ for Wonderful Worcestershire Women (see previous post). Whilst I am incredibly grateful and humbled by both, the most recent announcement really has shown how far I have come and an acknowledgment which isn’t just within the county.

For those who don’t know or read insurance publications (Yes, such things exist and they are interesting!), there are a few of giants. These include Modern Claims Magazine, Insurance Times and Post. Now, Post is probably the most established and every year they run The Claims Awards in London. Our company had submitted nominations for a few categories and given our busy schedule currently, we thought nothing of it.

Whilst travelling back from the north  a few weeks ago with my boss, I received a Facebook message. This was from one of the companies old clients whom sent their congratulations for my nomination, which given everything else that us going on and the time that had passed, I didn’t know what the message meant. One thing you should know about me is that I can be quite slow… You can literally tell when the light bulb comes on and the realisation on my face. This happened then. Trying to find the announcement on my phone was difficult enough with my boss’ fast driving but I was so excited and didn’t want to be disappointed that there had been a mistake. After checking, re-checking, checking again, looking at my computer screen monitor back in the office and reading the email….I had actually been shortlisted for The Claims Awards for The Rising Star!

If you are in insurance meetings, it all goes on in London and Worcester is unknown to many so for a small business in Worcester, this is pretty big. Whilst I am looking forward to some drinks and food at the awards ceremony, the thought of this opening up new doors is most exciting. I hope this will propel the companies hard work and efforts further. Fingers crossed for Friday 2nd June!

For full list and details, visit The Claims Awards.